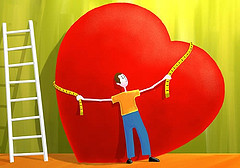 The e-card picture created by Grzegorz Łobiński for the EcardSphere project.
Posted by Cara Luecht at 10:52 AM 1 comment: