Doing the trim package at Extreme Makeover Home Edition was, without a doubt, the most challenging part of the project. Our shift was from 3 AM to 3 PM on Day 5 of the project, a Tuesday. We were recruited by my friend and frequent Green Built Home Makeover volunteer, Mike Twohig, whose company trims for Veridian Homes in addition to other custom builders for whom he works. Even though he has a substantial employee base—over a dozen people, he figured we needed 20 trimmers to get the job done.
Nighttime work at the site: 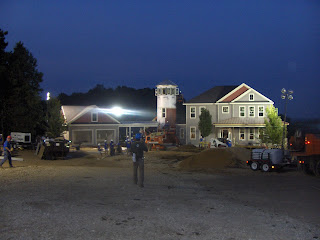 Now, 20 people in a 2500 sq ft house may not seem ALL that bad. But, on top of this there were about 10 cabinet installers and another 10 people whom we didn't know what they were doing! So, in fact, there were closer to 40 people in the house, and it was a crowd.

We planned to arrive to the site around 2 AM so that we could begin unloading equipment and start as soon as possible. It was a very hot July, and even in the middle of the night it already seemed warm. As the day continued we were certainly sweating buckets! It didn't help that the super-mix of concrete for the foundation was still curing in the walls and under the floor. So even through the insulation, heat was radiating into the finished basement. Walking into the unfinished basement with no insulation protection was nearly unbearable. I would guess it to be 120 degrees from the heat of the curing concrete in that area, while it was in the 90's during the day inside the house.

We divided into teams and each had our own area of production—window jambs, casing, doors, baseboard, etc. Challenges arose, whether it was locksets that had the wrong setback or window extension jambs that were too narrow. To be honest, I cannot now even tell you how we solved many of the challenges. What's the most important thing is that the work was completed— and it was very well done! The bumps in the road were many, but the finished product would not reveal that story. It was very good!

The evening before, Monday night, Anthony and I were called upon to help with some of the quality control. Monday afternoon, we had been working happily in the Production Tent, helping craft the special projects for the Design Team. Around 6 PM, David Simon of Veridian approached me and asked us to make repairs to the main stairway. There was miscommunication and the stairs, which were to have a finished layer of hardwood floor on them, were instead framed for a standard carpet installation. Left alone, they would not have met building code which measures from the rough dimension of carpeted stairs, but from the finished dimension of wood-surfaced stairs and floors.
The bed that Anthony helped to build: 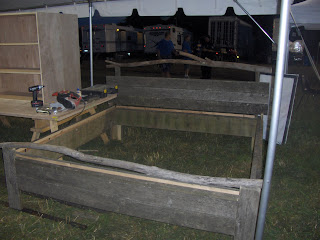 While we wished to get some rest before our early wake-up call, Anthony and I headed in for the stairway repair. Another carpenter overheard and offered to make the repair to the basement stairway. Anthony and I went at the main level stairs, taking off the 1-1/2" thick treads and replacing them with 3/4" thick ones. When finished with another layer of 3/4" hardwood, these stairs would now comply with code.

While we were working, I heard David behind me talking to the camera. We had been given strict instructions not to intentionally look into a camera if they were near us when we are working - if we are on film, they want us working rather than hamming it up! David approached me and said something like, "We had a little problem with the stairway, but Abe is here to repair it. You can see he's putting on lots of adhesive to make sure there are no squeaks when the house is done, right Abe?" "No squeaks, David!" I replied. Unsure of the filming status, my back was to the camera the whole time. As it turns out, I did make it on film -- just not on the show. Anthony and I can be seen in Veridian's behind-the-scenes DVD that they privately produced.

The site is a production studio as much as it is a construciton site. Here they are filming Paige Hemmis. I was in the background working on Paul DiMeo's project but did not make the cut. 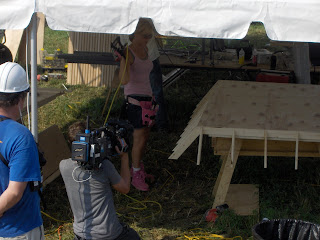 We thought we were done and packed up our tools and started to carry them out to load up. Soon, a project manager ran out after us and cried, "We need you to tear the basement stairs apart again! The other guys didn't fasten them correctly!" Much to our dismay, at that point (less than 6 hours until we had to be back on site), we found out that while the other carpenters replaced the treads, they did not properly fasten the treads and risers, leaving the thinner 3/4" material to flex. Luckily the adhesive was not yet dried, so our second demolition went much faster. Anthony drove in concealed screws to securely fasten the risers to treads, and within an hour the stairs were finally done correctly!

People have asked me about quality control on these homes. It is my experience that this home had excellent quality control, consistent with Veridian's standards. In fact, every one of Veridian's foremen/supervisors were on the job—someone was there 24 hours per day in charge of quality control, and that is how the stairway error was discovered, checked, fixed twice, and re-verified. The home was tested by Wisconsin ENERGY STAR™ Homes and a private, independent building inspection team was on site 24 hours per day to handle any inspection issues so work could continue. While errors certainly did happen, I choose to focus on the way that they were fixed. In any home, the final product is what counts. Errors can be fixed when they are caught, and the team was there to make sure it happened!

Volunteers Nick Hoehl and Jon Benninger is the basement "outdoor room" of the house - Paul DiMeo's special project. Abe helped fabricate the brackets from which the equipment is hung. 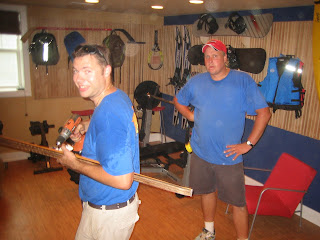 So we finally packed up our equipment after fixing the stairs, grabbed a late dinner around 9:00 PM, and then headed to a nearby vacation cottage belonging to one of Mike Twohig's employees. We wound down, got about 3 hours of sleep, and did make it back to the jobsite for our 3:00 AM starting time. And going full circle, that is how this story began. 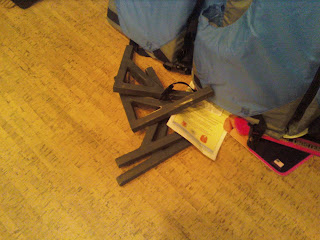